As experienced modelers know, many aircraft fly better with the motor angled a few degrees down and a few degrees to the right.  (This is for conventional aircraft, with puller, not pusher designs, and for right-hand props (clockwise-rotating when viewed from the cockpit). First off, the torque of the motor is ΄΄not΄΄the reason for angling the thrust vector down and to the right.  Torque roll from the motor for a standard prop (clockwise rotation as viewed from the cockpit) would try to ΄΄roll΄΄ the plane to the left.  Angling the motor right will try to ΄΄yaw΄΄ the plane right.  These are two different axes of rotation.

Torque roll is primarily countered by trimming the ailerons with some right trim, or adding a little extra weight to the right side of the plane, not by angling the motor to the right.  Angling the motor to the right will have a small, but very minor effect on the roll due to several yaw-to-roll coupling factors, including dihedral-sideslip effects, fuselage-wing “shadowing” created by side-slip angles, and wing lift differential due to yaw rates, but these effects are minor enough that it is incorrect to say that the motor angles are needed due to motor torque trying to induce a torque roll. Relatively simple explanations of the primary factors requiring the right and down motor angles are: 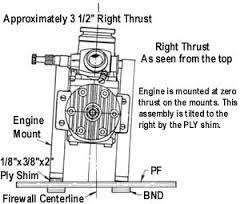 The right-thrust angle is required for the primary reason of countering a LEFT yaw due to P-factor.  P-factor, or Propeller-factor, is a relatively simple concept when understood, which states that for a clockwise-rotating propeller (when viewed from the cockpit), as airplane angle of attack increases, a LEFT yaw is produced due to a thrust differential the propeller creates. 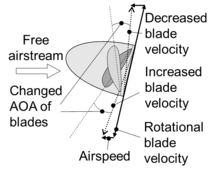 Imagine looking at the airplane from the left side (looking directly down the left wing), with the motor to your left when viewing the plane this way. 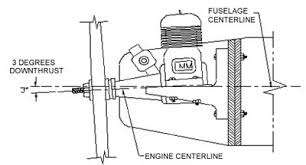 The down-thrust angle is required primarily to offset the climb response of higher-speed airflow over the wings.  As throttle is increased, airspeed over the wings due to prop-wash alone tries to almost instantaneously make the airplane climb.  Down-angle counters this climb for increased throttle.  Also, the aircraft will actually speed up, causing additional lift trying to make the plane climb.  Again, down-angle counters this climb effect.  Secondarily, the down-angle of the motor also reduces the “slant” of the propeller to incoming air (when viewed from the left side of the plane again), making it more upright (|), and less slanted (/), thereby also reducing the yaw due to P-factor simply by removing some of the slant (angle of attack), which causes P-factor!  Therefore, the down-thrust angle counters both the climbing effect, and some of the yaw due to P-factor!

Torque is not why motors are often angled slightly down and to the right.  Rather, the thrust angles are to counter the tendency to climb with increased throttle, as well as the tendency to yaw left due to P-factor being induced at positive angles of attack.